Lake Ontario is the world’s 14th largest lake by surface area. Although it has the smallest surface area of all the Great Lakes, it ranks fourth among the Great Lakes, having an average depth of 86 m (283 ft) and a maximum depth of 244 m (800 ft). It is the last (most easterly) in the chain of Great Lakes, flowing directly into the St. Lawrence River and into the Atlantic Ocean and home to approximately nine million people.

Lake Ontario is a basin that covers parts of Ontario and New York. Several large urban areas in Canada including Ontario’s capital city (Toronto) are located on the coast. The American shoreline is less urbanized and intensively farmed. There are a variety of fish species present in the lake, including chinook salmon, coho salmon, rainbow trout, brown trout, lake trout, northern pike, smallmouth bass, largemouth bass, walleye, muskellunge and carp.

Lake Ontario is famous for its salmon fishing. Many of the salmon in these waters top the scale at well over 30 pounds. Chinook and pacific salmon are among the many species present here. An average of 40 pounds of fish are caught each year. Some of the less common salmon species include coho salmon, pink salmon, and Atlantic salmon.

How to fish in Lake Ontario

There are different ways to fish on a Lake Ontario fishing trip. The popular ones are Ice fishing, shore fishing and charter boat fishing.

Charter Boat Fishing is the best way to get more fish in a small period of time. On a charter boat, you have the freedom to move around and change spots quickly to look for your targets. The fishing charters also have the gear sets you need to catch the big ones. Your local captain can bring you the spot where you can see and catch a lot of fish. They already have the experience and knowledge to how this adventure can give thrills and excitement to their clients. 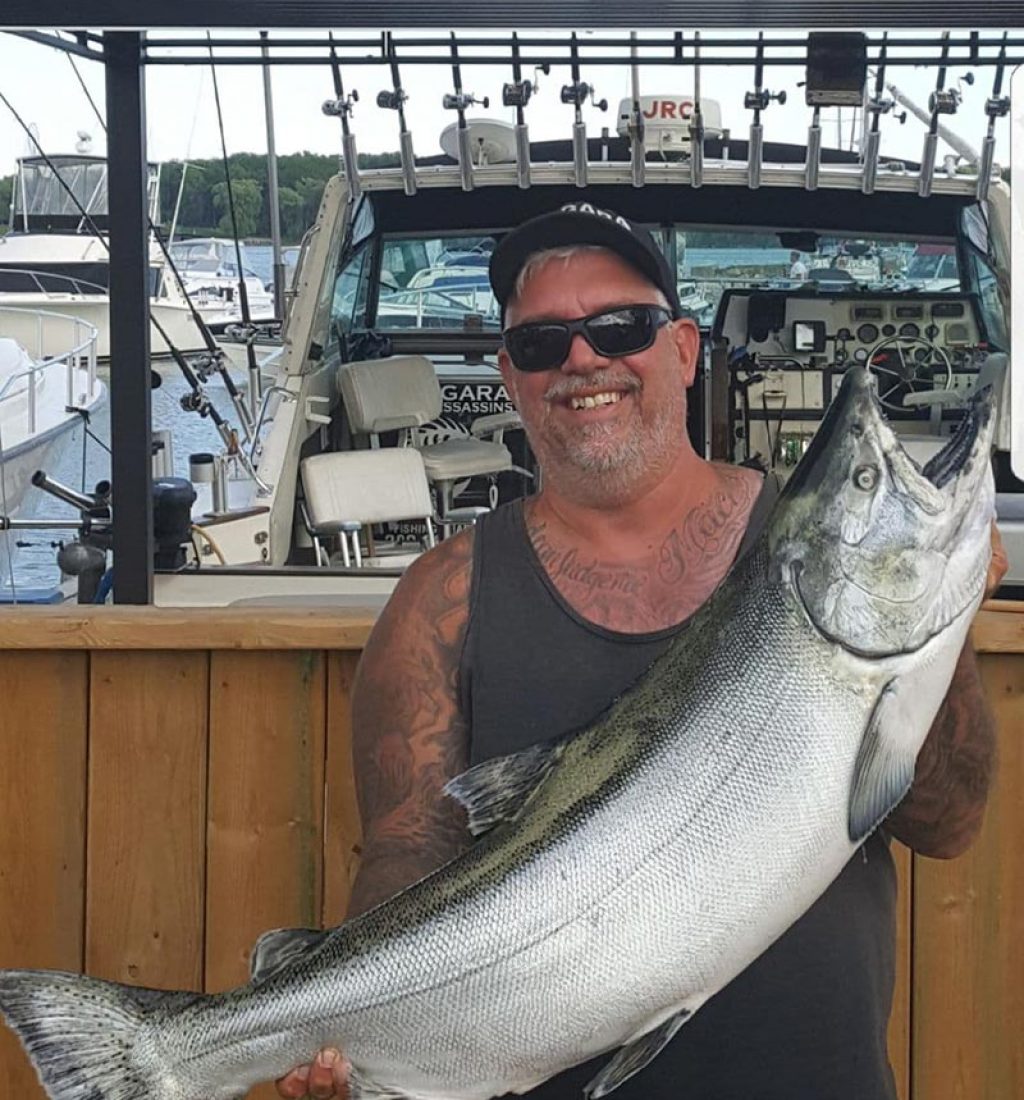 Where to Fish in St Catharines: The Niagara Bar

One of the most publicized fishing locations in the northeast in the last several years is the sand bar at the mouth of the Lower Niagara River where it drains into Lake Ontario.

From March thru May, this area is one of the most AMAZING fisheries you have ever seen!!

Lake Trout, Huge Brown Trout, and spring Coho and King Salmon gather to feed on smelt and alwives that gather at on the sandbar before they make their spring spawning runs up the lower river.

Catches of 30 fish or more a day are common.

“The Big Show” for Kings, Coho, and Trout

Salmon fishing on Lake Ontario’s south shore that began in the early 1970s has become the world’s best and brightest sport salmon and trout fishery without exception. The Niagara Fish Assassins team can reach fish from Grimsby to NY State from the quiet shaded home of the St. Catharines Marina in Port Weller located alongside lock one of the famous Welland Canal.  In addition, the Assassins team can fish out of the North Shore from Bluffers Park for powerful mid-summer Kings and chrome-sided steelhead.  It truly has become “The Big Show” for all things salmon and trout… come join the Niagara Fish Assassins team aboard one of three 40’ SeaRay vessels for a day to remember.

Spring fishing experience at its best. The spring sun warms the inshore waters which draws the baitfish near shore to spawn and the gamefish follow to feed on them.  Trolling with planer boards or downriggers with spoons, body-baits, and the occasional bait plug, salmon and trout abound this time of year.

Lake Trout, Brown Trout, Cohos and Kings all move within a half mile of shore and are caught in large numbers. A great trip after the long winter!!!!

May spring King fishing off the Niagara Bar is unlike anywhere else in the Lake Ontario with limit catches of Kings from 10-25 pounds … the bar is a unique feature that stacks and holds thousands of hungry salmon and trout that are caught trolling as well as jigging with a myriad of baits.

Deep water fishing for leaping steelhead and line screaming Kings.Whether far off the south shore or in eyeshot of the CN Tower, deep water rigger fishing is at its finest this time of year. Pulled plugs of baitfish, spoons, Spin Doctors, and flies are all a part of the arsenal that leads to fighting fish hooked at 100’ feet or more over 350’ of water.  Watching riggers and lines vibrate with heavy schools of bait below creates added anticipation that begins with seeing fish on the sonar around big schools of alewife, smelt, and herring.

Also, big Browns and large schools of lake trout school up from the drop-off at Port Weller to the Niagara Bar inshore.

Kings Kings and more Kings! The weather in Niagara this time of year is like no other… some days are hot enough and humid enough to need to look for refuge on the water!  King or Chinook Salmon (Oncorhynchus tshawytscha) and Coho (Oncorhynchus kisutch) begin to stage or school up outside the mouths of rivers in preparation for their fall spawning run.  As fish begin to locate their home or natal rivers, they have put on the necessary weight and stored fat energy to begin migration.  They continue to eat, and chase lures, plugs, and baits out of predator instinct as they look for current and photoperiod to enter the river.  The fish begin to “bronze-up” and males develop the characteristic kype and toothy jaws that make them seem like “dogs” although “dog-salmon” are the Chum salmon known in British Columbia’s watersheds.  Coho will dawn the reddish hue that they are characterized by before spawning.  These fish are readily caught and August – September is the best time to catch large numbers of trophy Kings in the 25- 35-pound class. Come join the Niagara Fish Assassins team during this amazing time of year. Although there is a 5 fish limit on Kings, catch and release can be practiced, and photos of some insane fish can make your memories of a lifetime!

Rainbows, Mature Kings and lots of 1-3 yr old salmon. As mature salmon begin to stack and stage off river mouths, their silver sides turned olive to crimson, angling becomes near shore and fast paced.  Fish are found in the current flows of river mouths one day and can be in 50 feet of water offshore of their rivers the next.  As this game of cat and mouse for Captains and anglers continues, the techniques can involve magnum sized spoons, dodgers and flies, and magnum plugs. This is the final push for spawning run fish and Niagara Fish Assassins will be right there to lead you to trophy Kings and Coho right down to the last possible runs have entered the rivers.  Come on out and chase a screamer salmon while admiring the fall breezes, aging grapes in the vineyards ready to be made into Niagara wines and amazing fall colours on the trees… you will not regret it.

Fall and Winter Staging Salmonids on the Niagara Bar

Perhaps the most surprising element of the Niagara River fishery, aside from the huge numbers of trophy fish, is the amazing diversity of habitat available to fish and the fishermen that pursue them year-round. As a young angler, I had the great fortune to fish with some wise and experienced fishermen. In our travels together we stumbled upon a feature of the Lower Niagara River that I believe has no comparison anywhere I have fished. The river itself comes to an end at Niagara-on-the-Lake not far from Fort George and directly off-shore from Fort Niagara (USA).  As the river comes to a delta… as most rivers do, something inexplicable happens as the current surges and boils, the bottom drops on the sonar to over 120 feet, perhaps deeper as accurate soundings with that much turbulence can be tough to find.  Over a span of approximately 400 yards that bottom returns to 23 feet where it stays in the rest of the outflow hundreds of more yards offshore.  The fish that are congregated over that span of water (approx. 1000 yards out from the mouth by 2000 yards wide) is indescribable… from December to March this area of river and lake is home to thousands of lake trout, brown trout, chinook, and coho salmon.  Anglers jigging 1–3-ounce jigs with soft plastic shad/smelt imitations or jigging spoons like crippled herring can find trout to 30 pounds and salmon to 20 pounds.  These are juvenile salmon typically 2-4 years old and not thinking yet of spawning… just eating. The trout are mature browns and lakers just living large on smelt and alewife and spot-tail shiners washed up the slope of the delta from deep water.  This is without a doubt a fishery that is unique to Niagara and accessible during times of the year that are typically not thought of as salmon and trout times of the year.  Just another plus to this great area we know as Niagara.